Use draw.io for continuous testing and development

Subpar user stories, silos, and miscommunication continue to introduce an unacceptably high number of bugs today. Requirements are often still written in ambiguous natural language, and are rarely connected to create a formal map of complex systems. These incomplete user stories instead introduce miscommunication and bugs to code, which are not picked up early enough as testers work from the same requirements and wait for development to finish before they can design tests. Test creation is furthermore slow and repetitive, blocking continuous delivery as low-coverage tests miss costly bugs. To deliver quality at speed, cross-functional teams must instead collaborate in parallel from an agreed understanding of the system, capable of developing the code and tests needed in-sprint.

Using Test Modeller, BAs, product owners, testers and developers can all work in parallel from “living documentation” of your system, generating the user stories and tests needed for rapid software delivery. Intuitive flowcharts provide a central point of collaboration for cross-functional teams, quickly importing draw.io diagrams, requirements and tests to build complete models. Ambiguity and incompleteness are quick and easy to spot in the visual flows, collaboratively overlaying additional logic to avoid requirements defects. Developers can work directly from the clear flowcharts, while Test Modeller generates accurate user stories into your tool of choice. The same flows auto-generate test cases, scripts and data, testing rigorously before the next release. 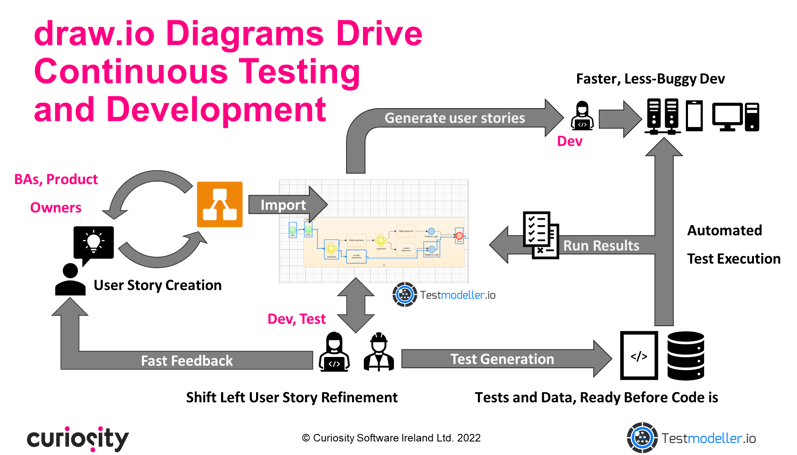 The requirements-driven tests generated by Test Modeller are optimised to cover all the modelled logic in the fewest possible tests, finding bugs while they are quick and easy to fix. Tests can be exported to your test management tool of choice, while a powerful code generation engine creates configurable scripts for your open source and commercial frameworks. This auto-generates rigorous test automation before a line of system code has even been updated, working in parallel to design and development to test rigorously in-sprint. The rigorous tests and accurate user stories are further quick and easy to update, importing new user stories and updating central flowcharts to regenerate exported artifacts without maintenance bottlenecks.

Watch this short demo of modelling draw.io diagrams to generate tests for an eCommerce system, to discover how:

Find out how your draw.io flows can drive parallel testing and development.