Part two in this series identified some key risk factors associated with a data migration, which underpin the shocking migration failure rates identified in part one. Let’s now consider common reasons why these risks factor are not successfully mitigated. In other words, let’s discuss four reasons for data migration project failures.

The system being migrated is, by definition, legacy. If it’s a mainframe system, it might be decades old and poorly documented. The team responsible for building the original system might further have left the organization, carrying knowledge regarding the system out the door with them.

This lack of system understanding significantly hinders the developers, BAs, and testers responsible for ensuring a smooth migration. Migrating unexpected or “bad” data from a legacy system risks outages and bugs. Lacking sufficient knowledge of the system, delivery teams cannot mitigate the risks posed by this data, as they might not even know it exists. BAs, for instance, cannot design rules for efficient or bug-free migrations, and nor can developers and testers deliver one.

2.     You don’t understand the new system functionality – and the requirements don’t help

To develop a new system ahead of a data migration, developers further require clear and complete understanding of all the desired functionality. They must know how the system should process the myriad of data that will be migrated to the new system, as well as the transforms needed to get it there.

Yet, testers and developers are typically equipped with incomplete or ambiguous requirements. These are usually text-heavy and poorly suited to the complex system logic. They furthermore rarely depict the system data or its structure clearly and comprehensively: 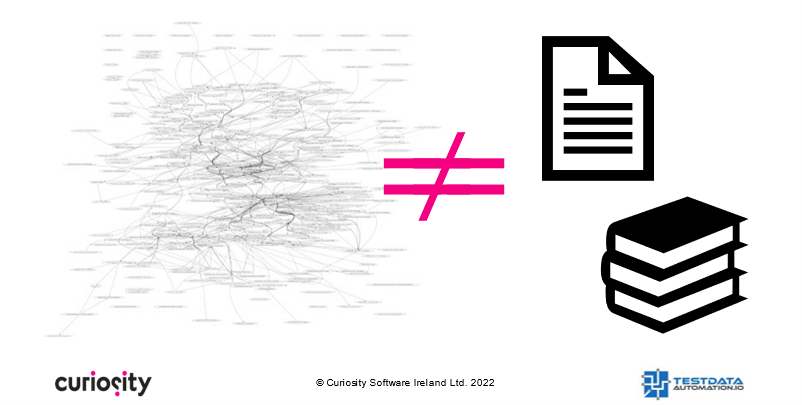 Text-heavy requirements are poorly matched to the logic of complex data structures.

These suboptimal requirements risk introducing functional bugs, missing functionality, and costly rework. If teams don’t know exactly how a new system should process a piece of data, how can they develop the new system pre-migration?

However early or late you start testing your migration, your teams require comprehensive test data. This data must be capable of testing all the new system requirements against the full range of data that the new system will process. It must therefore include unexpected results, negative scenarios, and new functionality.

Yet, organisations often attempt to test a migration using a slice of production data. This unwieldy data typically lacks unexpected results, outliers, and negative scenarios. It is instead highly repetitive, reflecting the “happy path” scenarios exercised by most production users:

The historical data further lacks data for testing new functionality. For example, if a new Business Intelligence dashboard allows users to filter by an additional dimension, how can testers validate this functionality? Testing with data that lacks this dimension, QA might not even guarantee that the new data will appear in the new system.

Overall, copying production data into a new system does not constitute rigorous testing, and nor does it offer the tools for a successful migration:

This is a common mistake, which was discussed in the previous article. To recap: Waiting to develop a new system before copying over test data risks finding bugs shortly before the “go live date”. This then requires rework for which time had not been forecast during migration planning.

Checklist for a successful migration project

These four common reasons for migration project failure should be addressed during the pre-planning phases of a migration. When embarking on a migration, ask yourself:

Fortunately, a unified solution can fulfil each of these criteria. This integrated approach ensures that your teams have the upfront requirements, understanding and data needed for a successful migration. The next article in this series will set out this unified solution.

Download every article in this series as Curiosity's latest eBook, How to avoid costly migration failures.